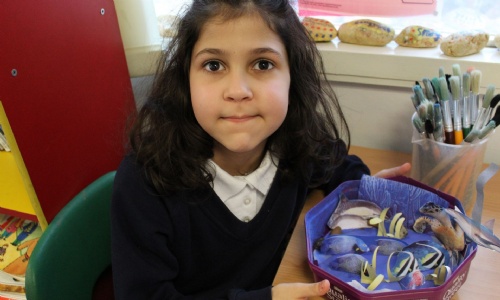 Year 4 children were challenged to build a habitat in a box which showed two food chains.

They were able to use any materials they liked for the habitat and the animals, but they then had to explain the food chains they had put in the box.

As you can see from the the wide range of boxes in the photographs the children really engaged in the task finding animal pictures as well as models to put in a wide range of habitats from marine environments to grassland savannahs. The children chose to construct bushes trees and many other models from card as well as using readily available natural materials for the ocean floor or the grasslands.

As a final task many children explained to the class the food chains they had included in their habitat.

Our children had a great time building their boxes and these have now been displayed with pride in their classroom for everyone to admire.